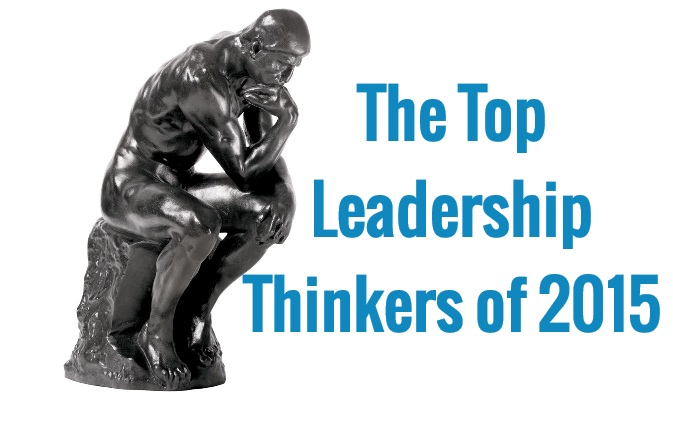 As the year draws to a close, it is time to look at those people who have influenced our thinking. Over the next few weeks, I will be posting various lists about trends and influencers covering various topics. In this post, however, we will be looking at ‘The top 20 Leadership thinkers of 2015’ these are considered to be the world’s top leadership and management thinkers.  Since 2001, Thinkers50 have published their ranking of the top leadership and management thinkers and they do this every other year. This is now becoming the equivalent of the ‘Oscars’ in the leadership and management community.  The founders, Stuart Crainer and Des Dearlove, who came up with the ideas over a pizza in 2000, aim to provide a global platform that allows ideas to be shared and recognised.

The criteria is based on: Michael Porter is well known for contributing to modern business strategy. His Ted Talk: Why business can be good at solving social problems highlights his forward thinking nature with regards to the good that business can do. He is a business school professor that believes that business can solve problems like climate change and access to water. Clayton is an expert on innovation and has been Thinkers’ number 1 in 2011 and 2013. He is a Professor of Business Administration at Harvard Business School and is highly respected in the field of Innovation. He has also written a highly impacting book titled ‘How Will You Measure Your Life: Finding Fulfilment Using Lessons from Some of the World’s Greatest Businesses’. Chan Kimis Co-Director of the INSEAD Blue Ocean Strategy Institute and The Boston Consulting Group, the Bruce D. Henderson Chair as well as the Professor of Strategy and International Management at INSEAD, France (the world’s second largest business school).

Renée Mauborgne is The INSEAD Distinguished Fellow and a professor of strategy at INSEAD. She is also Co-Director of the INSEAD Blue Ocean Strategy Institute. She was born in the United States.

Kim and Renee are both co-authors of Blue Ocean Strategy: How to Create Uncontested Market Space and Make the Competition Irrelevant (Harvard Business Review Press). Blue Ocean Strategy has sold over 3.5 million copies and is being published in a record-breaking 43 languages. It is a bestseller across five continents. Don Tapscott is one of the world’s leading authorities on innovation, media and the economic and social impact of technology and advises business and government leaders around the world. He has authored or co-authored 15 widely read books including Macrowikinomics; New Solutions for a Connected Planet; the 1992 bestseller Paradigm Shift and Radical Openness: Four Unexpected Principles for Success. Dr. Goldsmith is the author/editor of 35 books, which have sold over two million copies, been translated into 30 languages and become bestsellers in 12 countries. He has written two New York Times bestsellers: ‘MOJO’ and ‘What Got You Here Won’t Get You There’ – a Wall Street Journal #1 business book and winner of the Harold Longman Award for Business Book of the Year. His new book: ‘Triggers: Creating Behaviour that Lasts – Becoming the Person You Want to Be’ was published May 19, 2015. Linda A. Hill is the Wallace Brett Donham Professor of Business Administration at the Harvard Business School. She is the faculty chair of the Leadership Initiative and has chaired numerous HBS Executive Education programs, including the Young Presidents’ Organization Presidents’ Seminar and the High Potentials Leadership Program. Roger Martin is the Institute Director of the Martin Prosperity Institute at the Rotman School of Management and the Premier’s Chair in Productivity & Competitiveness. From 1998 to 2013, he served as Dean. In 2013, he was named global Dean of the Year by the leading business school website, Poets & Quants. Herminia Ibarra is the Cora Chair Professor of Leadership and Learning and Professor of Organizational Behaviour at INSEAD. Prior to joining INSEAD she served on the Harvard Business School faculty board for thirteen years. She is a member of the World Economic Forum Global Agenda Councils, a judge for the Financial Times and McKinsey Business Book of the Year Award, and Chairs the Visiting Committee of the Harvard Business School. Rita Gunther McGrath, a Professor at Columbia Business School, is regarded as one of the world’s top experts on strategy and innovation with particular emphasis on developing sound strategy in uncertain and volatile environments. Her ideas are widely used by leading organizations throughout the world, who describe her thinking as sometimes provocative, but unfailingly stimulating.
She fosters a fresh approach to strategy amongst those with whom she works. Daniel H. Pink is the author of five provocative books — including three long-running New York Times bestsellers: ‘A Whole New Mind’, ‘Drive’, and ‘To Sell is Human. Dan’s books have been translated into 34 languages and have sold more than 2 million copies worldwide. He lives in Washington, DC, with his wife and their three children.

Richard D’Aveni is one of the pre-eminent strategists of his generation. Over the last three decades he has worked with prominent families, multinational corporations and major governments throughout the world to shape their strategic agenda and their responses to it.

D’Aveni is the Bakala Professor of Strategy at the Tuck School of Business at Dartmouth College, a winner of the prestigious A. T. Kearney Award for his research, and a leading strategy consultant worldwide. From 2007 to the present, he has been listed among the top 50 strategists and management thinkers in the world according to the Thinkers50 ranking as published in The London Times, Forbes, CNN.com, The Times of India, and the Harvard Business Review. Eric Ries is the creator of the Lean Startup methodology and the author of the popular entrepreneurship blog Startup Lessons Learned. He previously co-founded and served as Chief Technology Officer of IMVU. In 2007, BusinessWeek named Ries one of the Best Young Entrepreneurs of Tech and in 2009 he was honored with a TechFellow award in the category of Engineering Leadership. He serves on the advisory board of a number of technology startups, and has worked as a consultant to a number of startups, companies, and venture capital firms. In 2010, he became an Entrepreneur-in-Residence at Harvard Business School. Vijay Govindarajan, known as VG, is widely regarded as one of the world’s leading experts on strategy and innovation. VG is a New York Times and Wall Street Journal Best Selling author, is the Coxe Distinguished Professor at Dartmouth College’s Tuck School of Business and the Marvin Bower Fellow at Harvard Business School. The Coxe Distinguished Professorship is a new Dartmouth-wide faculty chair. He was the first Professor in Residence and Chief Innovation Consultant at General Electric. He worked with GE’s CEO Jeff Immelt to write “How GE is Disrupting Itself”, the Harvard Business Review (HBR) article that pioneered the concept of reverse innovation – any innovation that is adopted first in the developing world. Harvard Business Review picked reverse innovation as one of the Great Moments in Management in the Last Century. The Director of the Martin Prosperity Institute at the University of Toronto’s Rotman School of Management, Global Research Professor at New York University, and the founder of the Creative Class Group, which works closely with governments and companies worldwide, Richard Florida is perhaps the world’s leading urbanist, “as close to a household name as it is possible for an urban theorist to be in America,” according to The Economist. Esquire has included him on its annual list of “The Best and the Brightest,” and Fast Company dubbed him an “intellectual rock star.” MIT Technology Review named him one of the world’s most influential thinkers. GDI also named him one of the world’s global thought leaders of 2013 and the AAAS (American Association for the Advancement of Science) named him 100 of the most followed scientists.  He is a member of the Global Agenda Council on the Creative Economy, World Economic Forum. Alexander Osterwalder is an entrepreneur, speaker, and the lead author of global bestseller ‘Business Model Generation’, co-authored by Professor Yves Pigneur with contributions from 470 collaborators in 45 countries. Alexander speaks frequently for Fortune 500 clients and has guest-lectured at top universities including Wharton, Stanford, Berkley, IESE, and IMD. He holds a PhD from HEC Lausanne and is a cofounder of the enterprise software firm Strategyzer, and The Constellation, a not-for-profit organization dedicated to eliminating HIV/AIDS and malaria worldwide.

Dr. Yves Pigneur has served as Professor of Management Information Systems at the University of Lausanne since 1984, and a visiting professor at Georgia State University, Hong Kong University of Science and Technology, and the University of British Columbia. He is editor-in-chief of the academic journal series Systèmes d’Information and Management (SIM), and together with Alexander Osterwalder, authored the international bestsellers Business Model Generation: A handbook for Visionaries, Game Changers, and Challengers. He earned his doctoral degree at the University of Namur, Belgium. Amy C. Edmondson is the Novartis Professor of Leadership and Management at the Harvard Business School. The Novartis Chair was established to enable the study of human interactions that lead to the creation of successful business enterprises for the betterment of society.

Edmondson is the author of ‘Teaming: How Organizations Learn, Innovate and Compete in the Knowledge Economy’ (Jossey-Bass, 2012), ‘Teaming to Innovate’ (Jossey-Bass, 2013), and more than seventy articles on leadership, teams, innovation, and organizational learning. Change Agent. Brand Futurist. Best-selling Author. Martin Lindstrom is one of the world’s premier (and toughest) brand building experts – advising Fortune 100 brands from the Coca-Cola Company to Nestle to Red Bull on how to build future-proof brands.

Martin Lindstrom has carved out a niche as a global expert and pioneer in the fields of consumer psychology, marketing, brands, and neuro-scientific research. He has developed an unorthodox way of doing what every company says it wants to do: understand its consumers’ deepest desires and turn them into breakthrough products, brands or retail experiences. Pankaj Ghemawat is the Global Professor of Management and Strategy and Director of the Center for the Globalization of Education and Management at the Stern School of Business at New York University, and the Anselmo Rubiralta Professor of Global Strategy at IESE Business School. Between 1983 and 2008 he was on the faculty at the Harvard Business School where, in 1991, he became the youngest person in the school’s history to be appointed a full professor.  Ghemawat was also the youngest “guru” included in the guide to the greatest management thinkers of all time published in 2008 by The Economist.

Steve Blank is a retired serial entrepreneur with over 30 years of experience in high technology companies and management. He is a Consulting Professor at Stanford in the Graduate School of Engineering STVP Program.

Steve has been a founder/participant in eight Silicon Valley startups since 1978. His last company, E.piphany, started in his living room. His other startups include two semiconductor companies (Zilog and MIPS Computers), a workstation company (Convergent Technologies), a supercomputer firm (Ardent), a computer peripheral supplier (SuperMac), a military intelligence systems supplier (ESL) and a video game company (Rocket Science Games).